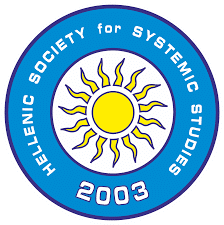 The Hellenic Society for Systemic Studies (HSSS) is a scientific non-profit society whose main goal is to advance and to spread out the Systemic Studies with the development of theoretical systemic approaches which they will be applicable to more than one of the traditional departments of knowledge through the use but also through the development of internationally accepted methodologies – multimethodologies, and to establish the expertise of Systemic Analyst in Greece in the universities, the banking environment, the organizations and generally in enterprises.

HSSS promotes the unity of science through improving the communication among specialists.

The aims of HSSS focus on the development and application of systemic approach in scientific fields and in the actual practice as it is described in its own charter.

The organization of National Conferences pertaining to Systems as they mainly apply to Greek Society. HSSS will work towards the establishment of the profession of a System Analyst in Greece.

The International Scientific JASS (Journal of Applied System Studies) will be supported by HSSS which will be offered electronically, by its Publisher “Cambridge International Science Publishing”, for free to the HSSS members, and thus HSSS conveys its worm appreciation for such an offer to the said publisher.

The Scientific fields and fields of application in which the HSSS members specialized on and work together with Greek and other colleagues who belong to international scientific societies and for a are indicatively the following:
Business Administration
Information Technology
Social Systems
Strategy and Cybernetics
Systems Application in Medicine
Bio-technology and Information Systems
Virtual Organizations and Entities
Public Governance Systems
Banking Systems
Anthropocentric Systems (Human-centered)
Law Systems
Religious Systems
Design of Educational Systems
Systems Thinking in TQM
E.c.t.

IFSR MEMBERS ONLY – Link to our Hylo Community

Join our virtual campfires and share your events, resources and projects ... or simply connect - be part of the whole!

IFSR MEMBERS ONLY – Link to our Hylo Community

Join our virtual campfires and share your events, resources and projects ... or simply connect - be part of the whole!

Meeting the complexity of the 21st century and the challenges of the Anthropocene makes system thinking inevitable.

Systems Sciences and cybernetics comprise a holistic and integrated paradigm that overcomes the thinking which created the global challenges we are facing today. It allows for a different perception of the dynamics of the world and provides smarter and truly sustainable solutions.
When the IFSR was founded 1981 it aspired to unite the world of systems sciences to meet the challenges of the 20th century, to learn from the catastrophise of the world wars, the conflicts of the cold war, and preparing to meet the daunting ecological threats being addressed in the report to the Club of Rome.

Systems Sciences and cybernetics have always collaborated as a community spearheading new thinking, advancing not only sciences and theory but also technology and practice.
Today the IFSR reaches far beyond pure academic institutions; it brings together all people who understood that new solutions need new thinking for a thrivable world.

Be part of the whole!

Any cookies that may not be particularly necessary for the website to function and is used specifically to collect user personal data via analytics, ads, other embedded contents are termed as non-necessary cookies. It is mandatory to procure user consent prior to running these cookies on your website.